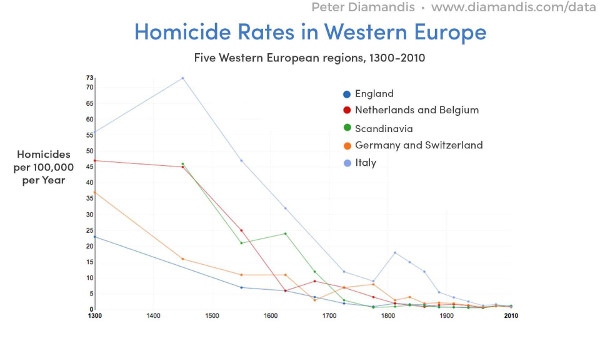 Grumps: Heart disease is the leading cause of death in the world.

Optimist: In the U.S. for example, age-adjusted heart disease rates are going down: 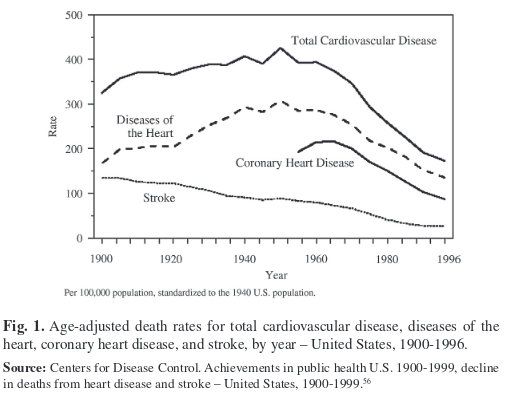 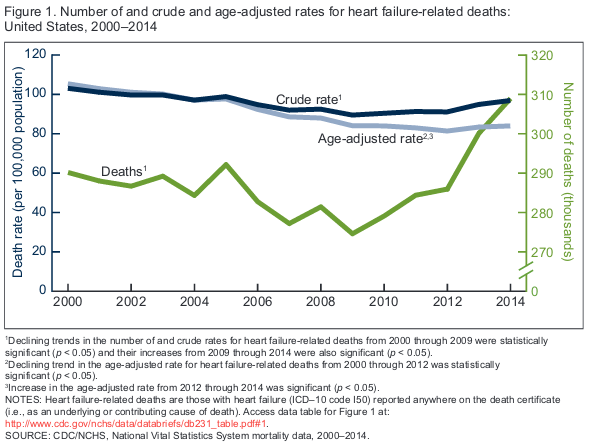 Grumps: Cancer is the second largest cause of death and seems to be a scourge.

Optimist: In the U.S. for example, most cancer rates are going down.

Cancer is a group of diseases characterized by the uncontrolled growth and spread of abnormal cells.

In 2014, about 585,720 Americans are expected to die of cancer, almost 1,600 people per day. Cancer is the second most common cause of death in the US, exceeded only by heart disease, accounting for nearly 1 of every 4 deaths. 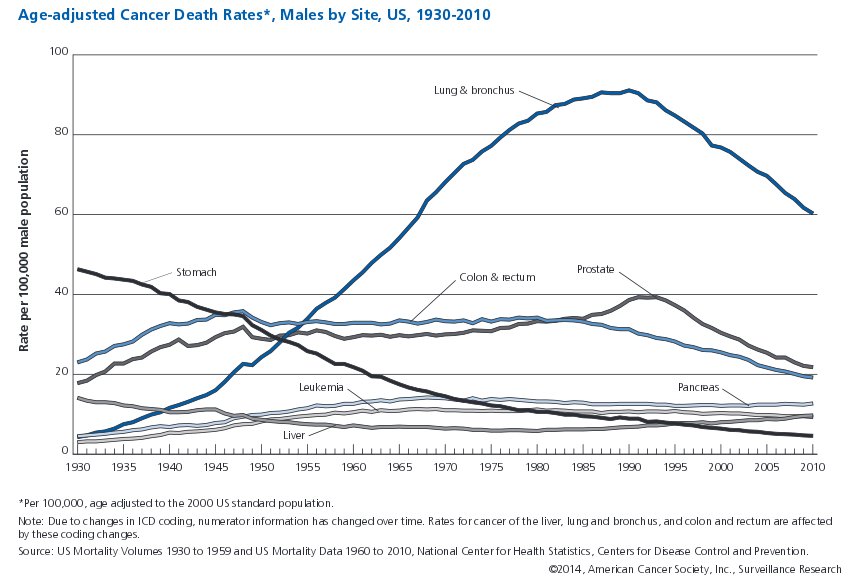 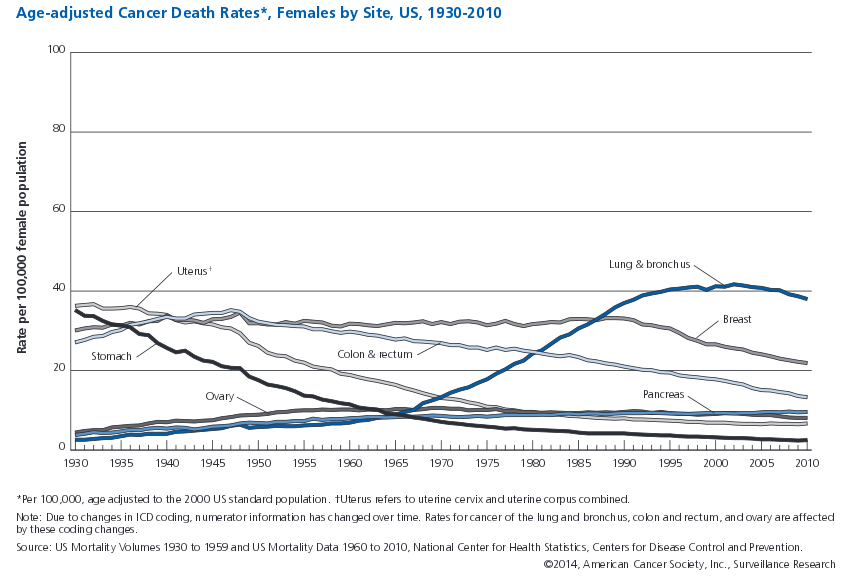 Grumps: As we get older, more people will get the terrible disease of dementia.

Grumps: Malaria is still killing hundreds of thousands of humans every year.

Worldwide, between 2000 and 2012, estimated malaria mortality rates fell by 42% in all age groups and by 48% in children under 5 years of age... Modelling suggests that an estimated 3.3 million malaria deaths were averted between 2001 and 2012, and that 69% of these lives saved were in the 10 countries with the highest malaria burden in 2000; thus, progress is being made where it matters most. About 3 million (90%) of the deaths averted between 2001 and 2012 are estimated to be in children under 5 years of age in sub-Saharan Africa. These account for 20% of the 15 million child deaths that are estimated to have been averted in sub-Saharan Africa since 2000 through overall reductions in child mortality rates. 6 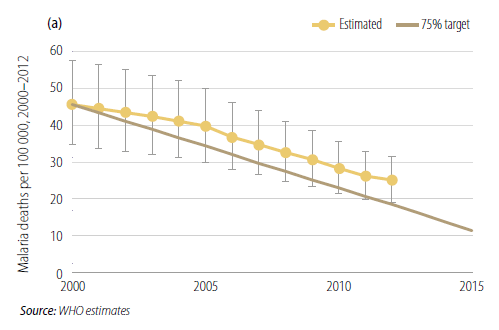 As Dr. Pinker observes, Smallpox and Rinderpest are now discussed in the past tense because they have been effectively eliminated (in 1979 and 2011, respectively). Smallpox killed an estimated 300 to 500 million people in the 20th century (3 to 5 million per year). Rinderpest was a livestock disease mostly affecting cattle and it devastated pastoral communities for millenia, often killing 30% of a herd and sometimes resulting in mass human starvation. Polio and guinea worm are likely to be eradicated soon.

Grumps: It seems from the news that disaster and apocalypse are right around the corner.

Optimist: Although disaster is possible, it's much less likely than the news makes it seem.

Contrary to what the media suggests, hardly anything is ever totally awful, few things are truly shocking and very little is unsurvivable. The revolution will not mean the end of history; it will just change a lot of things in many different small and complicated ways. The moves in the Crimea will, at their worst, be a rerun of a version of the Yugoslavian conflict, which was terrible for many thousands and left you and 99.9% of humanity unscathed. The economic indices remain quite grim, but we have weathered comparable challenges many times over. A bad avian flu may disrupt international travel and defeat known drugs for a while, but research laboratories will eventually understand and contain it. The storms looked dramatic, but in the end, they affected merely a fraction of the population and receded soon enough. Rome fell, torn apart by vicious barbarians, but six hundred years later, everything was almost back to normal again. 7

Using annual data from 1975 to 2010... By almost any measure, transportation is considerably safer now than it was in the mid 1970s. The improvement is especially noticeable for commercial modes such as aviation, railroads and maritime. Even the risks from private highway driving have halved during the past thirty-five years. 8 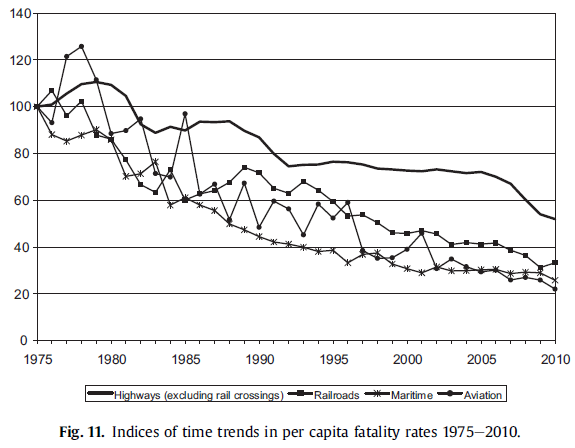 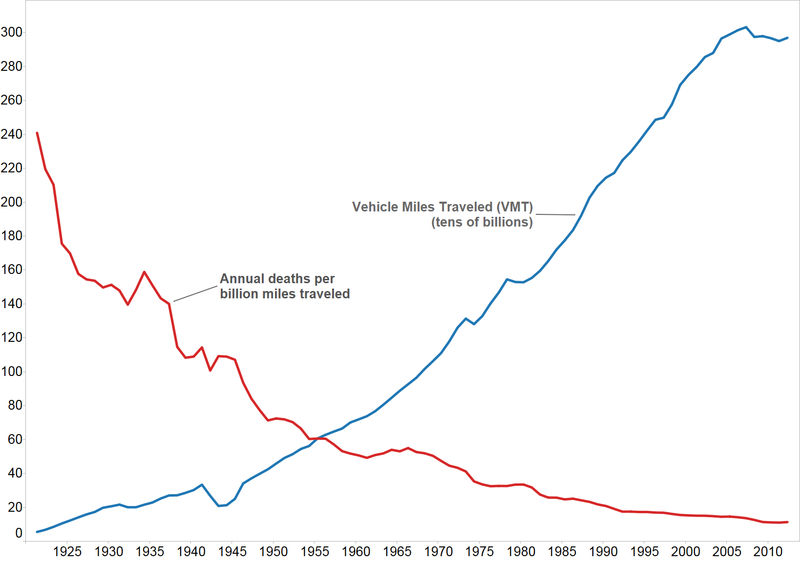 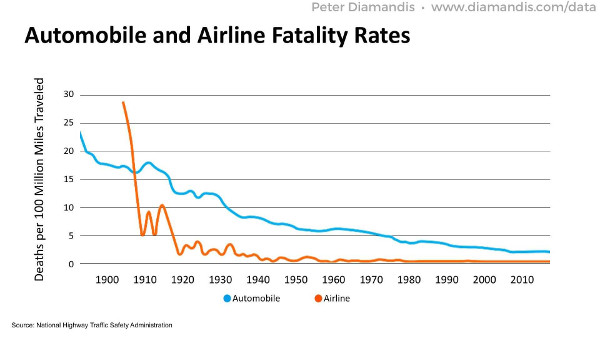 Grumps: Death is a great riddle. As Joseph Conrad writes in Heart of Darkness 15:

I have wrested with death. It is the most unexciting contest you can imagine. It takes place in an impalpable greyness, with nothing underfoot, with nothing around, without spectators, without clamor, without glory, without the great desire of victory, without the great fear of defeat, in a sickly atmosphere of tepid skepticism, without much belief in your own right, and still less in that of your adversary. If such is the form of ultimate wisdom, then life is a greater riddle than some of us think it to be. I was within a hair's-breadth of the last opportunity for pronouncement, and I found with humiliation that probably I would have nothing to say.

Perhaps all the wisdom, and all truth, and all sincerity, are just compressed into that inappreciable moment of time in which we step over the threshold of the invisible. Perhaps! 15

Michel de Montaigne: I want death to find me planting my cabbages, neither worrying about it nor the unfinished gardening. 16

Grumps: Death can be seemingly very random and happen to the most prepared.

Optimist: The impending death of all of us, while at different intervals, is known and allows us perspective on the value of every successfully completed second.

We pay a lot of attention to safety. We could fairly feel we have earnt some right to assume that we are, at key points, in control. Our plugs are correctly wired. We have insurance. We may have some savings. We like to wonder what we might be doing in ten years.

And yet, of course, right now, the thing that will kill us is eroding, building up sediment, gathering force or dividing quietly somewhere deep within us. Already today, a thousand freak accidents that could have wiped us out decided, after all, not to happen. We are luckier than we bother to think.

It would drive us mad to dwell on the true risks at every point. A degree of denial is a necessary prerequisite to an ambitious life. Yet to ignore the dangers as much as we do robs us of perspective and a correct sense of the value of every day that does not end in catastrophe. We lose out on opportunities for gratitude and modesty when we remain blind to the precipice along which we walk unknowingly at all points. Right now, a few centimetres from the eyes reading these words, lies a network of veins irrigating your frontal cortex; it would take only a tiny malfunction in one of them for your world to dissolve into chaos. 11

Grumps: I or someone I know is about to die.

Optimist: The imminent reflection of death is something not everyone experiences, and even a momentary reflection may hold within it wisdom that others strive and never find their entire lives.

The dying are the great appreciators of this world: they notice the sunshine on the roller blind, the laughter of a grandchild, another breath… And they know what spoilt ingrates we all are, not stopping to register the wonder of every passing minute. They were once like us of course. They know they wasted decades and from their beds, they strive to tell us of their folly and warn us of our own... Death is the great re-organiser. It refashions ambition, it encourages us to attach new value to things we hardly would have thought of as goals of any kind. 12

Most of what upsets us from day to day is disconnected from what ultimately gives our life its meaning – and yet these stresses absorb our energies with vicious intensity nevertheless. Vivid reminders of mortality put our prosaic obsessions into question. When measured against our limited time spans, the true insignificance of some of our concerns is emphasised and our narcissistic, frivolous tendencies can cede to our more sincere and purposeful sides. 13 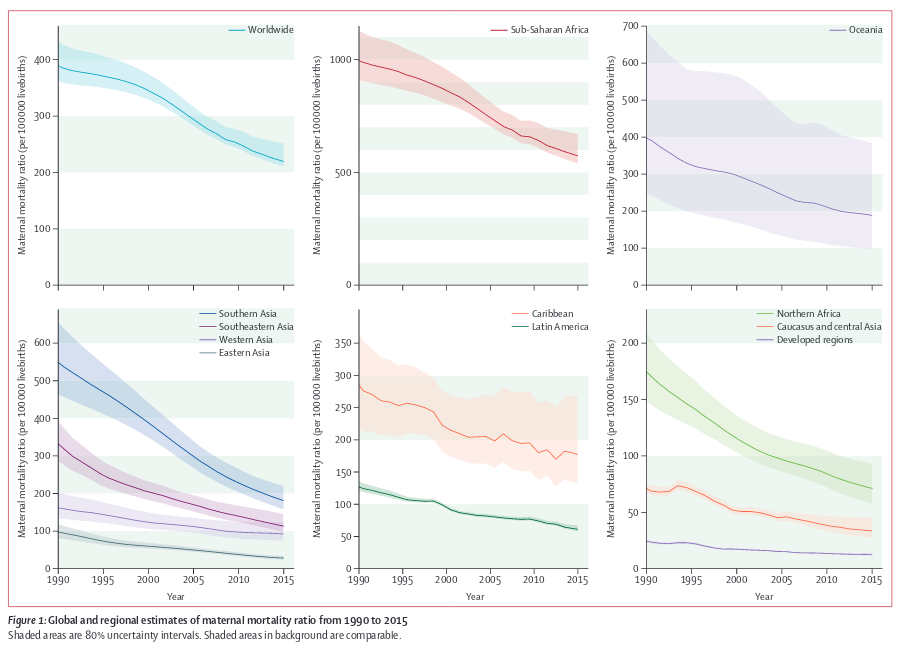